Still a sellers’ market, but more homes for sale in Stanwood-Camano area 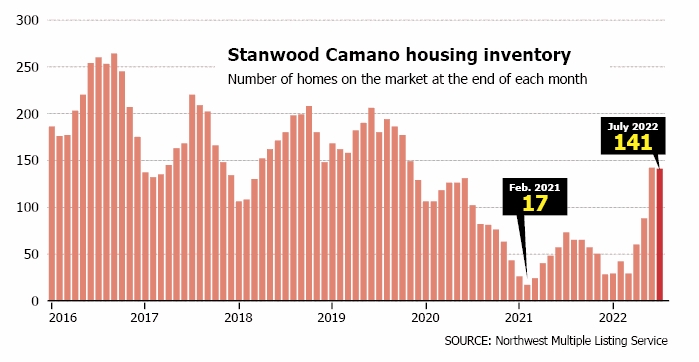 After several years of low inventory and high demand, the local housing market is taking a step toward a more “normal” environment.

“It has been such a super intense market. Everything moved at such a fast pace,” said Marsha Ross, a local broker with John L. Scott. “It’s balancing out a little more now, which is better for everyone.”

In the Stanwood-Camano area, there were 141 homes on the market in July — about double from a year ago.

However, the tight market of the past few years never seemed to dampen sales, which held steady at around 100 per month in the summertime during the past five years. It meant buyers had fewer choices and more competition when making offers.

“It’s been such a unique two years,” said Marla Heagle, broker and co-owner of Windermere Stanwood Camano. “It seems like everyone is slowing to take a breath finally.”

In the white-hot local market of the past few years, it was common to see a home listed on a Thursday with offers reviewed on Monday, she said. Most homes, when priced right, would see multiple, aggressive offers, she said.

“So far this summer, the prices just aren’t escalating as fast. But we’re still seeing multiple offers here and there,” Heagle said.

On Camano, the median price of the 34 homes sold in July was $601,000, down slightly from $615,000 a year ago, according to data from the Northwest Multiple Listing Service.

Local home prices have risen dramatically as the region kept working over the past decade to climb out of the Great Recession. In July 2016, the median price of homes sold on Camano was $280,000 and in Stanwood was $347,000.

Bob Wold, broker and co-owner of Re/Max Elevate in Stanwood, said he expects the market to continue trending toward normal.

“The last few years were unprecedented,” Wold said. “With the world in COVID and inventory levels shrinking to levels we’ve never seen before, there’s no other word for it than unprecedented. But I’m happy to see it moving toward a balanced, healthy market. That’s what’s best for both buyers and sellers.”

Across Western Washington in July, there were fewer sales, but prices still rose, albeit at a slower rate than the previous year. The median price on last month’s closed sales of single-family homes and condos increased 6.1% from a year ago, rising from $589,000 to $625,000 in Western Washington.

Inventory of single-family homes and condominiums across the 26 counties served by Northwest MLS has not exceeded two months since January 2019 when there was 2.3 months of supply. But in July, data showed 2.01 months of inventory across Western Washington.

“Today’s buyers have their cups finally overflowing with options as residential inventory grows to about two months of supply,” Dick Beeson, managing broker at RE/MAX Northwest Realtors in Gig Harbor, said in a Northwest MLS news release. “Buyer and seller expectations have changed. It feels like things are starting to normalize a little.”

Both Heagle and Ross, who sell homes in the Stanwood-Camano area, said the houses sold here are to a wide variety of people, from young families to retirees.

“About 50% of my clients have been young families,” Ross said. “We also get a lot of people looking to retire here from Seattle.”

“The demographics here are getting younger,” she said. “At the same time, the typical buyer doesn’t want a property with a lot of maintenance. They’re asking for a smaller yard, bigger views and access to things like parks.”

Those who changed to working from home during the COVID-19 pandemic are seeking home office space and a reliable internet connection, Heagle added.

Nationwide, those rising mortgage rates have combined with already high home prices to discourage some would-be buyers. Mortgage applications have declined sharply. Across the U.S., sales of previously occupied homes have fallen for five straight months, during what is generally the busiest time of year in real estate.

However, the local economy “remains buoyant, which is an important factor when it comes to the regional housing market, particularly as it affects buyers,” Matthew Gardner, chief economist for Windermere Real Estate, wrote in his quarterly housing report. “Even though the number of homes that came to market has jumped significantly, which should favor those looking for a new home, demand is still robust, and the market remains competitive.”

“We are seeing builders moving their price points down and providing incentives to buyers in closing costs and buydowns to help borrowers obtain lower interest rates.” Deely said. “We are coming off the fevered pitch of a market that had tremendous velocity over the last few years. With listings starting to build again we are seeing a bit of a natural slowdown, yet still very much a sellers’ market.”

Related Articles
News Windermere under new ownership By Izzie Lund | January 23, 2023   Windermere Real Estate Stanwood Camano has new leadership for the first time in almost two decades. Jill and Jeff Vail have taken over as owners. The Vails take over for Randy and Marla Heagle, who also own Arrowhead Ranch on Camano Island. The Heagles have stepped down as […]
Community Windermere Stanwood Camano: Under New Ownership! Windermere Real Estate Stanwood Camano is officially under new ownership. Randy and Marla Heagle have owned the Stanwood and Camano Island Windermere branches for 18 years and have led their Realtors® and company with passion. Windermere Stanwood Camano (formerly known as Camano Island Realty and Dan Garrison Realtors) has been locally owned for 70 years […]
News Bidding wars becoming more common as demand outpaces supply in local real estate market   By Evan Caldwell  | June 23, 2020     Home sales have remained surprisingly steady since the start of the coronavirus pandemic, but new listings have not. Fewer homes than ever are for sale in the Stanwood-Camano area, further pinching a market that already had historically low inventory, according to new data from the […]