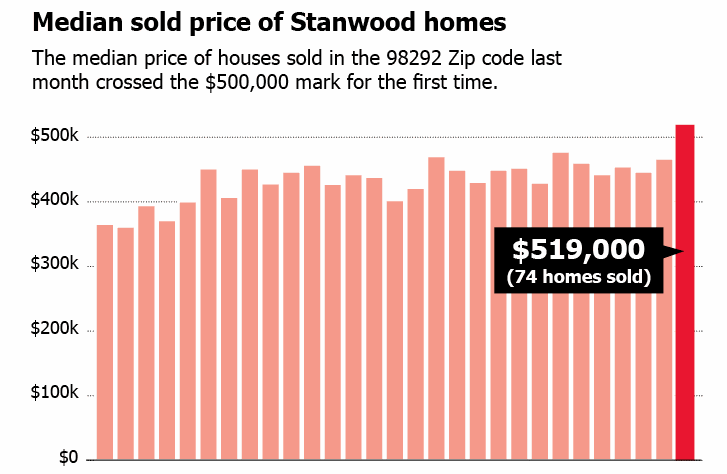 The local real estate market remained hot in March despite the slowdown related to the COVID-19 pandemic, but that is expected to change in April and May.

The median price of houses sold in the Stanwood area hit a record high last month, and Camano Island prices were near a record as home-buying remained steady, according to March data from the Northwest Multiple Listing Service.

“We expect that all numbers will decline in April and May as a direct result of the governor’s “Stay Home” order that became effective on March 26,” stated Mike Grady, president and COO at Coldwell Banker Bain. He also said he expects April and May will be “bridge months” before the market returns to a “more normal” activity level, “assuming we all abide by Governor Jay Inslee’s directives.”

Despite limitations, Northwest MLS brokers added 10,291 new listings during March, outgaining February by 2,505 listings and nearly matching the 10,516 new listings a year ago.

However, Snohomish County continues to have one of the lowest supplies of homes for sale. Only 135 homes were for sale in March in the Stanwood-Camano area, down from 153 the same time a year ago, according to the Northwest Multiple Listing Service.

“Inventory here is still low,” said Marla Heagle, an owner of Windermere Stanwood Camano. “And most people are sitting still, freezing right now, and not thinking of putting their home on the market.”

Most sales that closed in March were initiated before the slowdown from the pandemic.

“Spring was off to a great start,” Heagle said. “Hopefully, this will be a V-shaped recession where we climb out fast. … When we come out of this, there’s nothing indicating the housing market won’t just jump right back.”

Meanwhile, real estate agents are adapting to a new way of conducting business. According to Inslee’s order, brokers are able to take new listings and send contracts electronically, and arrange for appraisals and inspections to be conducted as needed. They may also show listings with strictly limited group sizes at a safe distance.

“We’re still seeing people looking for homes,” Heagle said. “There are still people who need to move, but mostly, people know this is temporary.”