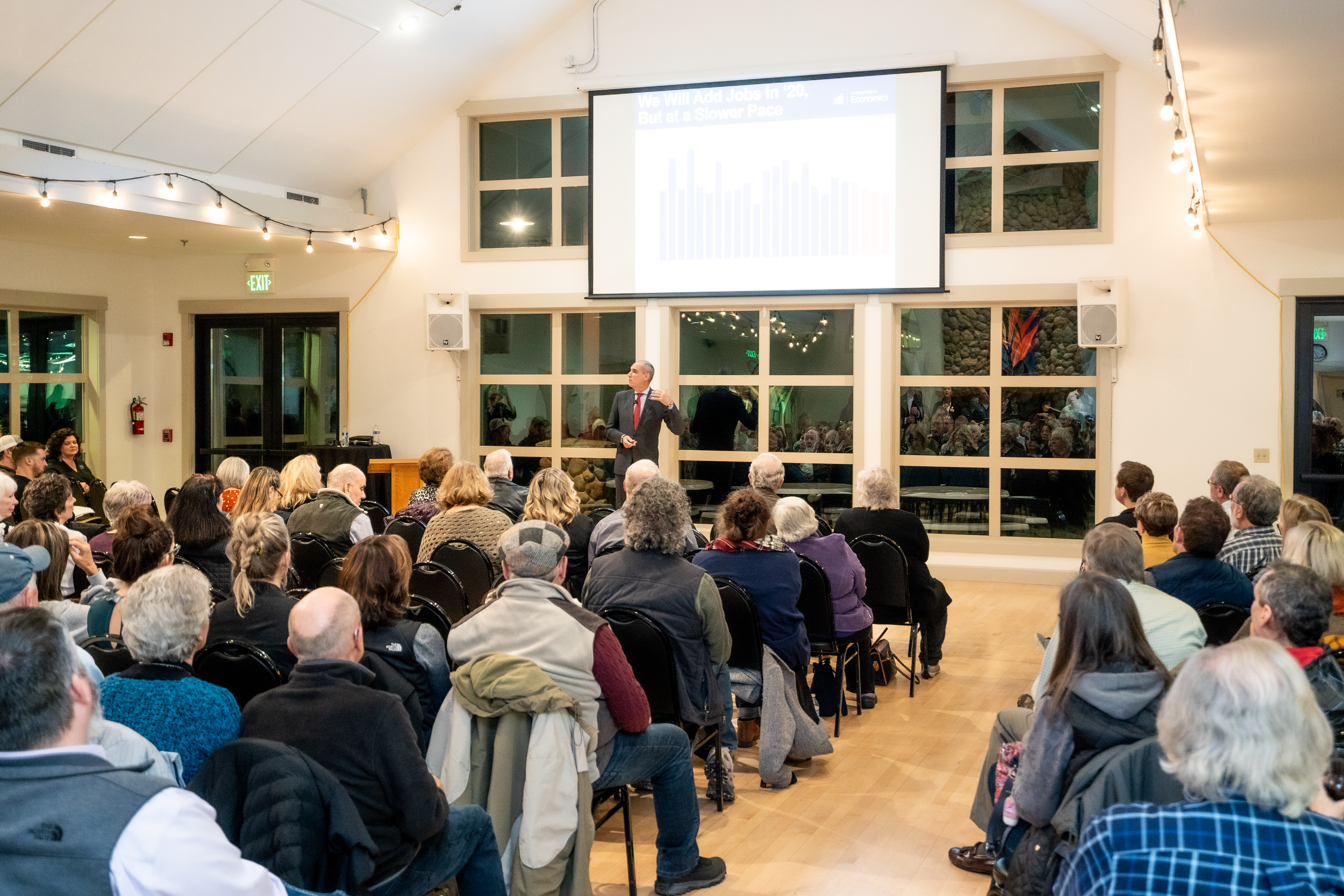 “We are suffering from our own successes,” said economist Matthew Gardner. “We have a robust economy, and that means growing pains.”

The solid economy equates to more jobs — and more people — moving to the region, putting continued pressure on infrastructure and housing markets, he said. Gardner spoke about the national, state and local economic past, present and future to about 250 people at an economic forum Friday, Jan. 24, at the Camano Center.

“If you want a job, you can certainly find a job,” said Gardner, citing Snohomish County’s low 2.5% unemployment rate. “And jobs and income growth should increase this year.”

Snohomish County continues to be one of the fastest-growing counties in the nation. By 2025, an estimated 250,000 people are predicted to join the 800,000 already living in the county, according to estimates by the state Office of Financial Management.

However, finding affordable places to live is the current challenge, said Gardner,

“People are coming, that’s for sure, you can see it in the housing demand,” he said. “We need to be building more homes.”

“Because inventory is so tight, housing prices will continue to rise in 2020 .. and it could be a very tight market for a very long time,” Gardner said. “So, why aren’t there more homes for sale? They’re living in them longer and moving less frequently for jobs.”

Americans nowadays are staying in their homes for about eight years before moving – up from four years from 2000-09, according to Attom Data Solutions, a real-estate data firm.

In addition to newcomers, millennials are starting to enter the housing market, adding increased pressure in the first-time homebuyer category, Gardner said. Even the few hundred new homes and about 150 new apartment units planned to be built in Stanwood in the next few years are insufficient to meet demand, Gardner said.

“To better compete, we need to create housing people can afford to live in — the teachers, the firefighters,” he said. “And certainly cities will need to address infrastructure needs, and governments will need to work on mass transit options.”

Gardner said the U.S. economy is due for a minor recession in the coming years. The U.S. was last in recession from 2007-09.

“We might have a recession in 2021 in some segment of the economy, but it’ll be OK; it’ll be modest,” Gardner predicted, citing data showing major companies slowing the pace of hiring in the run up to the presidential election. “What do companies do when they’re worried? Nothing. Like a deer in headlights, they freeze, they’re being cautious.”

This article was originally published on goskagit.com.

Related Articles
Buying Windermere Chief Economist Shares Local Predictions for 2023 Matthew Gardner, Windermere’s Chief Economist, joined us at the Camano Center where he delivered his 2023 forecast for Stanwood and Camano Island. He provided an in-depth look at the local market and highlighted key trends that will impact the area’s housing market over the next few years. His forecast provided essential insight into where Camano […]
Community Windermere Stanwood Camano: Under New Ownership! Windermere Real Estate Stanwood Camano is officially under new ownership. Randy and Marla Heagle have owned the Stanwood and Camano Island Windermere branches for 18 years and have led their Realtors® and company with passion. Windermere Stanwood Camano (formerly known as Camano Island Realty and Dan Garrison Realtors) has been locally owned for 70 years […]
Community Economist to talk about 2020 job, housing markets at free forum     By Evan Caldwell  | Jan. 15, 2019        Stanwood, Wash. – Matthew Gardner returns with his crystal ball to peek at what 2020 holds for the local economy and housing market. Gardner, the chief economist for Seattle-based Windermere Real Estate, is the keynote speaker for the 2020 Economic and Housing Forecast […]