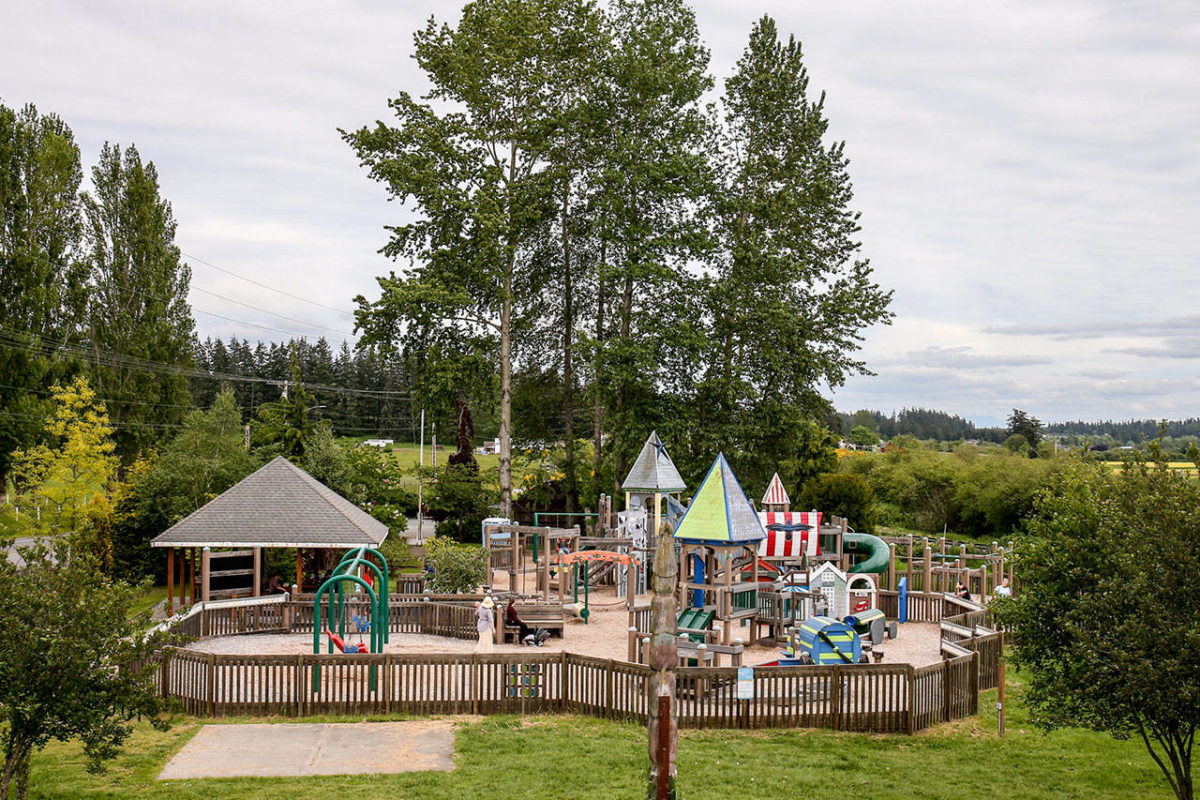 CAMANO ISLAND — Mike Nestor likes to think of how many children have become friends on the playground at Freedom Park, and how many parents get to talking at the picnic tables.

He doubts any of the families who frequent the park realized it was at risk of foreclosure and could have gone to auction, up for grabs to a developer with the highest bid.

More than 15 years ago, a group of community and environmental advocates fought to replace plans for a commercial center with a park. Now, people think of the grassy space, local artwork and wooden playground as a park managed like any other.

Freedom Park, at Highway 532 and E. North Camano Drive, isn’t a publicly owned park. It’s on private property, owned by the Freedom Park Association. That means the association is in charge of costs, including maintenance, water and taxes.

Taxes fell behind over the past four years. Nestor, who took charge of maintaining the park and paying bills, recently got a letter from Island County. If taxes weren’t paid, the property would go into foreclosure proceedings. A developer from Oklahoma offered him a few thousand dollars for the land.

Jeff Ericson, who founded Camano Island Coffee Roasters next to the park, paid the taxes with help from neighboring Windermere Real Estate and the local Rotary Club, which put in the playground in 2010.

The foreclosure notice was a standard message that goes to property owners who are at least three years delinquent on taxes, Island County Treasurer Wanda Grone said.

The Freedom Park Association owed $3,679.22 in overdue taxes, and $433.53 for the current year. Grone confirmed it’s all been paid and nothing more is due until October.

That solves the immediate crisis. The county won’t foreclose on the park.

But it doesn’t solve the problem: It costs money to keep up the park, and there’s no steady source of income. Nestor used to cover most of the taxes by auctioning art during Camano’s Chili Chowder Cook-Off, but lately it hasn’t been enough. If something doesn’t change, the park could be at risk again.

Nestor and Ericson are working with others who were involved in the park’s creation to form a board of supervisors for the Freedom Park Association. The board is expected to set a budget and coordinate with businesses and service groups to raise money and rally volunteers. The initial estimates for water, taxes and hiring out for maintenance — which currently consists of Nestor’s twice-weekly lawn mowing and some volunteer landscaping — would total about $11,000 a year. That doesn’t include unexpected costs, such as the portable toilet replaced less than a month ago after someone set it on fire.

The park also might qualify for decreased taxes under the public benefit rating system, something Nestor and Ericson say they’re working on. They are raising money to pay overdue water bills, catch up on maintenance and set money aside for the next two years, while the tax break is in the works and the board gets together. A GoFundMe website has been set up seeking $20,000. As of Thursday, more than $7,400 had been donated.

Nestor, 69, is a third-generation Camano Islander who lives in the cabin his grandfather reportedly won in a card game. Ericson, 55, is an Arizona transplant who bought property on the island after his first visit. In Ericson’s coffee-scented office, the two reminisced about how Freedom Park started.

“You drive by it at 50 mph and it all looks pretty simple,” Ericson said. “But making it happen was not simple.”

In the late 1990s, a supermarket chain, Brown and Cole’s Cost Cutter Foods, owned the property. It was considered for a grocery store, then a shopping center. A group, Camano Action for a Rural Environment, objected. “A pink flamingos and neon signs kind of place” just wouldn’t suit the island, Nestor said.

They asked Brown and Cole to consider giving up the land. The company agreed to donate the park space if someone purchased two neighboring parcels.

Nestor approached Ericson. At first, he wasn’t interested, but Nestor was persistent and he caved. Former state Sen. Mary Margaret Haugen worked with them to get a park-and-ride, too.

Freedom Park was dedicated on Dec. 7, 2002, as a memorial to Pearl Harbor. Some survivors came to the ceremony, and they kept coming for about eight years on Pearl Harbor Day. There still is an annual event, but most survivors are gone, Nestor said.

Camano needs gathering places like Freedom Park, Ericson said. It’s a beautiful island, but can be isolating for newcomers.

“People find ways to connect to their communities,” he said. “They just need those spots.”

An online donation campaign has been set up at gofundme.com/Freedom-park. Anyone interested in volunteering to mow or weed whack can email mikenestor@windermere.com.