Latest NWMLS News for the Northwest 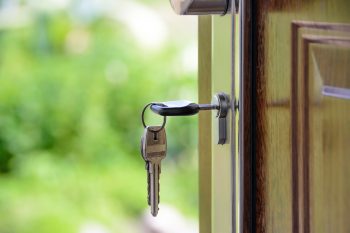 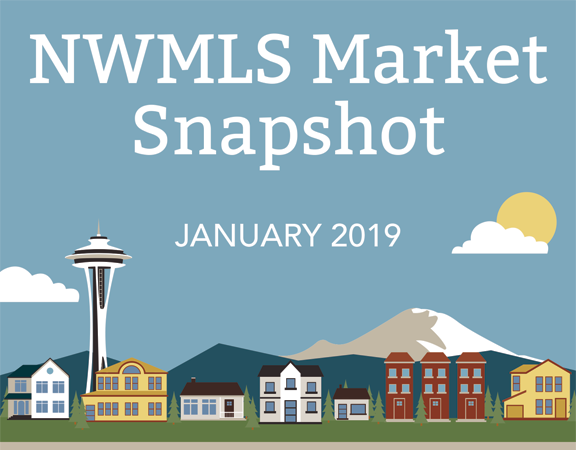 KIRKLAND, Washington (February 2019) – Homebuyers around Washington state are making their way back to the market, hoping to take advantage of improving inventory, attractive interest rates, and more approachable sellers, according to officials with Northwest Multiple Listing Service.

Northwest MLS statistics for January show year-over-year improvement in the volume of new listings and total inventory, along with moderating selling prices. Although fewer pending sales (mutually accepted offers) were reported than a year ago (down about 3.3 percent), January was the smallest year-over-year decline since May 2018 when the drop was about 2.7 percent.

Brokers tallied 7,564 pending sales during January, a decline from a year-ago when they recorded 7,820 transactions.

Seven counties had increases in pending sales of single family homes and condos compared with 12 months ago, including King (up nearly 7.5 percent) and Snohomish (up 3.8 percent).

James Young, director of the Washington Center for Real Estate Research at the University of Washington, commented on pending sales. The mixed results, including “healthy growth” in King and Snohomish counties, “corresponds well to upward movement in mortgage applications late in December, a leading indicator for the month to follow,” he noted, adding, “One should expect to see increased sales activity in the coming months throughout the region if mortgage applications continue to stabilize or increase.”

J. Lennox Scott, chairman and CEO of John L. Scott Real Estate, said buyers “came out of the woodwork” after the holidays, eager to take advantage of better housing conditions. “Areas close to the job centers are seeing improved affordability from spring 2018,” he said, attributing it to lower interest rates, strong job growth, and adjusted pricing.

Scott said buyers are also attracted by expanded inventory resulting from the addition of new listings and a higher number of unsold inventory, although he noted “inventory levels are still considered a shortage.”

Prospective buyers who sat out the second half of 2018 or were pushed to the sidelines during last year’s heated market are finding better buying conditions, agreed Robb Wasser, branch manager at Windermere Real Estate/East. “Interest rates are near a nine month low and buyers have a stronger platform for negotiating, which have helped drive a 9 percent increase in pending sales of single family homes in King County,” Wasser stated.

MLS members added 7,090 new listings of single family homes and condos during January, up from the year-ago figure of 6,805 and nearly doubling December’s total of 3,631. At month end there were 11,687 active listings in the database, up more than 45 percent from the year-ago total of 8,037. Listing inventory more than doubled in both King and Snohomish counties.

Sixteen counties, including all four in the Puget Sound region, reported more inventory than a year ago. Even with sizable gains, supply is still tight at 2.4 months system-wide. (In general, four to six months typically indicates a balanced market.)

“The rise in inventory is largely due to investors who are selling because they believe the market has peaked and they want to unload their properties before interest rates rise too far,” said OB Jacobi, president of Windermere Real Estate.

“New listing inventory in King County is bringing more homebuyers to the market. We are enjoying increased open house traffic, including during the Super Bowl weekend,” remarked Dean Rebhuhn, owner of Village Homes and Properties in Woodinville. He also commented on the early arrival of the spring market, crediting jobs and immigration as factors. “Properly priced homes are selling!” he exclaimed.

Mike Grady, president and COO of Coldwell Banker Bain, expects activity to pick up heading into spring, as is customary. “I have absolutely no concerns about 2019 being a strong year, with prices rising 4-to-6 percent and units up 10-to-12 percent. There is no reason for sellers not to move on with their lives and list their homes,” he remarked.

Northwest MLS figures show an area-wide price gain of just over 5 percent on January’s 4,865 closed sales of single family homes and condos. Only six of the 23 counties in the report had year-over-year price drops. Among them was King County where prices slipped about one percentage point, from $571,250 to $565,000.

Prices on single family homes (excluding condos) rose 5.4 percent from the same month a year ago. In the four-county Puget Sound region, prices increased in Kitsap, Pierce and Snohomish counties, but decreased about 2.9 percent in King County, dropping from $628,388 to $610,000. Prices for single family homes in Kitsap County, where there is only about 1.7 months of supply, surged nearly 14.7 percent when compared to a year ago.

“The minor decline in King County home prices in January doesn’t mean the housing market is tanking; it’s primarily because of the significant increase in the number of homes for sale,” suggested Jacobi. “We may see prices take minor dips periodically in the coming year, but for the most part they are expected to continue rising, just at a far more modest rate than in recent years,” he added.

“Median prices on closed sales continue to remain stable in January with continued strong upward growth in outlying counties,” stated Young. “Pierce, Kitsap, and Thurston counties outpaced King and Snohomish counties in price growth, consistent with the past few months. This trend indicates that many first-time buyers and middle-income families are continuing to look to the outer regions of the area for value. Strong price growth in Lewis and Whatcom counties also support this general trend of outward migration along the I-5 corridor,” he added.

Mike Larson, president/designated broker at ALLEN Realtors in Lakewood (Pierce County) concurred, describing the slowdown in activity during the second half of 2018 as a “much-needed correction.” Sellers in King and Snohomish counties “got caught up in the craziness so many buyers turned to Pierce County for their affordability solution,” something he expects will continue this year.

Condo prices rose slightly, about 1.6 percent, as inventory more than doubled from a year ago. The median price for the 645 condos that closed last month area-wide was $325,000. In King County, where more than half the sales occurred, the median price was $383,500, up slightly from the year-ago figure of $380,000.

“Buyers are signaling a more aggressive spring market with an uptick in search activity and high application rates with mortgage companies,” said George Moorhead, designated broker at Bentley Properties. He also noted would-be owners are commenting on having more options to consider and “are feeling the real estate market is less volatile.” He also reported sellers are similarly encouraged by having more options, “and not having to race around with the fear of making a housing mistake.”

“We’ve clearly been in a transitioning market, but given the ongoing demand for real estate in the Greater Seattle area, we may have adjusted to a ‘new market reality’ wherein inventory is up and prices have re-aligned, but there is still strong demand for housing. I would expect to see a robust regional real estate market going forward into spring,” stated O’Leyar.

The director of the Washington Center for Real Estate Research was more guarded in his expectations. “Increasing inventory and moderate price growth in urban counties (and growth in outer regions of the Puget Sound) point to several problems relating to how potential homebuyers see things moving forward,” said James Young. He referenced figures from the National Association of Homebuilders National Trends Report indicating a shrinking pool of buyers.

“The picture for first-time buyer affordability in the longer term for the region is not bright for potential homeowners unless changes in the housing supply framework throughout the area are addressed soon.”

Larson also expressed concerns around affordability, “particularly for entry-level buyers as well as move-down buyers who also want to sell. The middle rungs on the housing ladder are slowly disappearing,” he remarked. Options like condos could help fill that void, he suggested, but believes they won’t be built “until the state legislature reforms the condo liability laws.”

Affordability is a “crucial issue” for 72 percent of millennial renters, according to a survey by Apartment List.

Northwest Multiple Listing Service, owned by its member real estate firms, is the largest full-service MLS in the Northwest. Its membership of around 2,200 member offices includes more than 29,000 real estate professionals. The organization, based in Kirkland, Wash., currently serves 23 counties in the state. 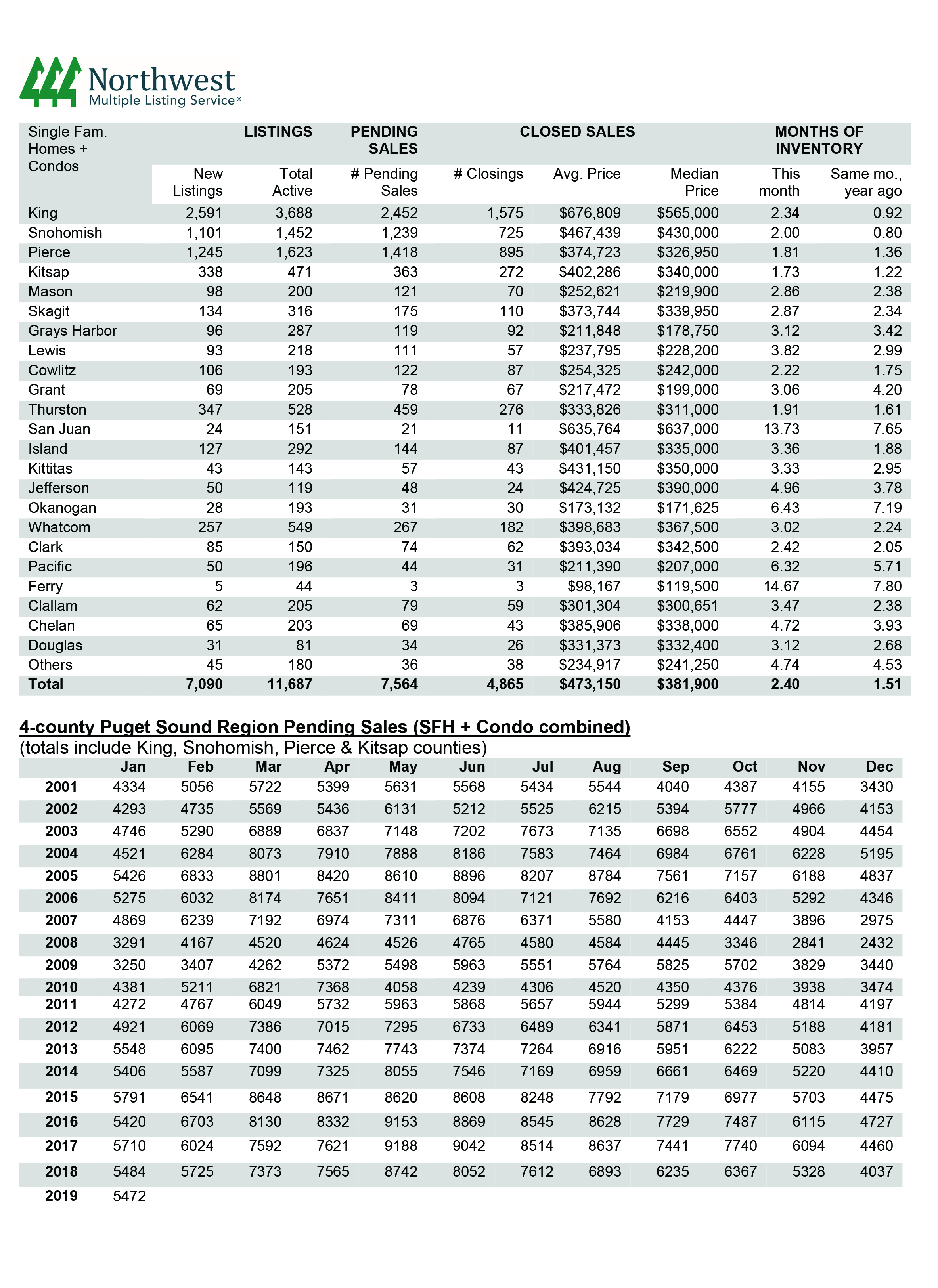 Related Articles
Buying Market Insights | January 2021 . . . JANUARY 2021 kicked off the new year with 50% more homes sold in the Stanwood Camano Island area than January 2020. There were 38 homes sold on Camano Island and 46 sold in Stanwood last month, compared to 22 and 36 sold in January 2020. . . Stanwood and Camano Island are […]
Buying 10 Predictions for the 2021 Housing Market by Windermere’s Matthew Gardner . Top 10 Things to Look Out for in 2021 . . 1. Economic growth will pick up – but not until the summer. I am expecting solid employment gains in 2021, but growth is likely to start in earnest in the second half of the year once the vaccine has been more widely distributed. […]
Community The Q4 2020 | Western Washington Gardner Report The following analysis of the Western Washington real estate market is provided by Windermere Real Estate Chief Economist Matthew Gardner. We hope that this information may assist you with making better-informed real estate decisions. For further information about the housing market in your area, please don’t hesitate to contact a Windermere Stanwood / Camano Island […]