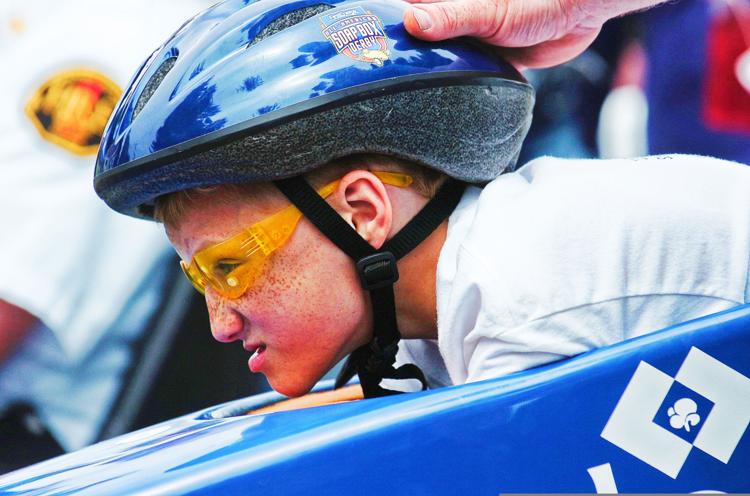 The need for speed hits this weekend.

More than 70 young speedsters square off Saturday during the 11th annual Windermere Stanwood-Camano Soap Box Derby, taking place for the first time on the new track at Arrowhead Ranch on Camano Island.

Defending champion Braddock Johnson — the 8-year-old son of Megan and Scott Johnson of Camano Island — is back to challenge other competitors ages 7 to 17. Last year, Braddock advanced as one of only two 7-year-old racers to the All-American World Championship Soap Box Derby in Akron, Ohio.

As the only soap box derby in Washington, this event attracts racers from throughout the state.

The local race is divided into two groups. In the stock division, the combined weight of the stock car, wheels and driver cannot exceed 200 pounds. For the super stock division, the combined weight cannot exceed 240 pounds. Stock division drivers must be age 7-13; super stock drivers must be ages 9-17. The top finisher in each division wins a trip to the annual All-American Soap Box Derby Race Week, taking place July 15-21. Champions at the All-American compete each year for the title of world champion and more than $36,000 in college scholarships.

The free, public event takes place at a more leisurely location than in previous years of racing down a Stanwood street. The event starts at 9 a.m. and features food and fun throughout the day, according to event organizers.

“We’re so proud to introduce the Arrowhead Ranch race track and headquarters to our local community in time for this year’s Derby,” said Randy Heagle, who owns Arrowhead Ranch and the local Windermere offices with his wife, Marla. “It’s going to open up countless opportunities for these kids to create memories with their families.”

The Heagles broke ground on the track in April, bringing in 2,000 tons of rock and 563 tons of asphalt to create the new raceway. Surrounding the track are large swaths of lush grass where families can watch the action.

“The support we’ve received from the community throughout the building process has been a testament to the great people who call Stanwood and Camano Island their home,” Heagle said.

The race is at 615 Arrowhead Road on Camano Island. For more information, visit soapboxderby.org/stanwood-camano-island.